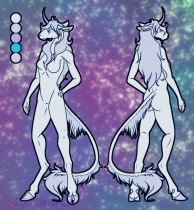 Heraldic unicorns are rare. They’re all throwbacks to a now extinct type of delphin. Most of the ones that have appeared in the last 500 years or so are closely related to the royal blood line. Helaine was never the type to speak up, or stand up for herself. She has always been timid and flighty from her earliest days. The knowledge she was related to Snowhawk was given to them both in the hopes it would help her overcome her fears of… everything. She instead leaned heavily on her cousin for reassurance, and the older mare was happy to give this. Mather thought that Snowhawk spending her time doting over this small mare was a waste of everyone’s time, and decided to sell Helaine.

Her auction price was record setting. She was purchased by the patriarch of the Sinihukka family. While this was great for Mather and for the auction house, Ulmer found himself soon disappointed with the mare, with her timid nature making her unable to fulfill the job he wanted her to, and relegated her to being a pretty toy for his nephew, Janus. Once she was freed from the expectation to be anything more than eye candy, for now, she rarely left the younger wolf’s side. 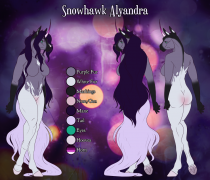 Novel Information:
Snowhawk earned a reputation at her first owner’s home for being willful and aggressive. Mather kept her around, as her bloodlines are exceptional, but after a time, found her to be more a liability than she was worth. When she attacked another stallion on loan to attempt to breed her, then right after, one of the guards, he made the decision to send her off for sale. No bloodline, even if it was directly related to the former royal family, was worth the hassle and headaches she caused.

Last names are uncommon for slaves, but Snowhawk was given hers by another slave, one dear to her. She some how convinced Mather to allow it to become official, though she has never revealed how.